But the other day I was wanting to help contribute to ecosystem of Pi-hole monitoring tools, and to be able to get an app onto the Microsoft Store. Now as you may have already assumed this was very largely fueled by  a Web 2.0 childlike wonder in the capabilities of API's. But regardless with some excitement I got to work. Now I have never before built a Windows Desktop Application and had a lot to figure out, mainly the API's that are needed and the entirety of the C# language.
Which for both of those big thanks to the Team at Microsoft for the expansive documentation they have for this information and to the team at Code Project. Their help was very valuable during this project. To Preface the examples shown for this project are meant to be a more High-Level overview on how the project was created, rather than a step by step guide to it.
The first challenge to building this app was having it exist only within the System Task Tray, since WinForms applications like to start in an actual window.
Now luckily what I was able to do this within the template Program.cs file by calling a class that would then create a NotifyIcon right away.
Then from here I have the class ProcessIcon.cs file that then initializes a new NotifyIcon Object, and adds some extra information like what happens if you left click on it, and hover over it.
Now with the first major hurtle solved I had to find a way to work with the API data from the Pi-hole itself.
The first step in this process for me was finding a proper way to format the information. Which amazingly enough there was a built in way to do this inside Visual Studio.
All that had to be done was grab the raw json data that the Api would be getting from Pi-hole, which in this case can be easily grabbed from http://localhost/admin/api.php in your web browser. (Where localhost == Your Pi-hole IP Address.) 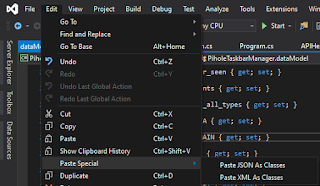 Then within Visual Studio:
And lastly we have to have a way to contact the Pi-hole itself. For this I ended up using the System.Net.Http.HttpClient class. I then added "application/json" as the Accept field in the header request.
Now obviously there was a bit more to make this project complete, like the saving of settings, a timer in order to repeatedly ask the API for new data, and controls for updating the Context Menu in the Task Tray with the new API data. But to get better insight into exactly what was needed to make the full application you can view the full source on GitHub.

But for the next chapter in this story is where the Microsoft Store factors in.

Now recall earlier when I said that I started this project unfamiliar with the territory, I made a discovery that the project flat out couldn't work the way I was hoping.
Really I wrote the whole program within WinForms, which due to it being an older system is not allowed onto the Microsoft Store. Meaning I had to recreate the app using UWP to allow it onto the store. While there are tools like Desktop Bridge to help convert my existing app, this project has all been about learning, so I will just take the hit and take my time to create the app from scratch in a UWP environment.

Although once I started re-writing the whole app with UWP I made a final discovery.

UWP doesn't natively support putting anything in the SysTray.  At this point I though the project was done. Either it couldn't go onto the Microsoft Store, or it couldn't live in the SysTray. That was until I found some information from Stefan Wick, who is a Principal Program Manager at Microsoft, that has created a series of guides about creating a Desktop Extension to allow the application in the SysTray. While this will created a more difficult on boarding process to get my app onto the store will allow it to function as I hoped. Now that I have a solution for this final hurdle I'll get to work, and update you guys once I'm done.

Having the WinForms program unable to be listed on the Microsoft Store, it'll be listed here.
Visit the project on GitHub here!
Download the Project here! (Link available soon)

Popular posts from this blog

July 20, 2020
I have nothing to hide... I'm sure many of you have heard about the EARN IT Act and the LAED Act before. I know I have, but what I haven't heard much about is what can we do about it?  Now if this is your first time hearing about this, there's a little you should know. Lindsey Graham a Senator for South Carolina, which for the uninitiated has said that he thinks " Congress might need to explore the need to limit some forms of freedom of speech " (Source) or after it was revealed that the NSA was conducting Global Surveillance said he was " glad " (Source) the NSA was collecting phone records of Americas, has proposed both the EARN IT and LAED Act. Which put very, very simply, if we take into account the Internet Societies opinion of " Effective encryption is key to secure online communications for everything... a foundational component upon which a trustworthy Internet is built " (Source) , would ruin that for everyone. These new bills ap
Read more